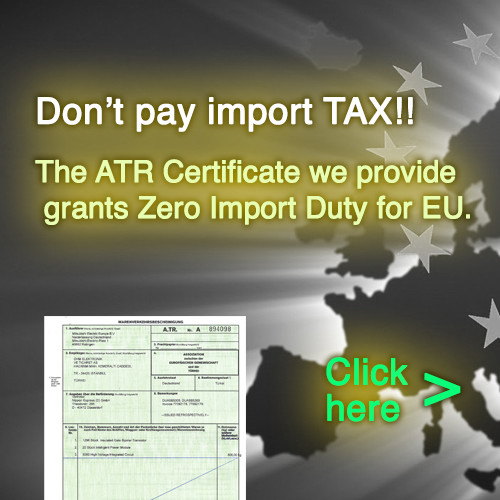 A newly developed packaging technology in combination with direct potting (DP) resin and Insulated Metal Baseplate (IMB) is presented. DP resin is liquid epoxy resin so that epoxy resin encapsulation can be applied to power module with conventional case-type package. By combining with IMB, that is eliminating the solder layer between insulator and copper baseplate, DP resin encapsulation contributes to prevent the degradation of solder layer under the chips. As consequence, the new package is improving the capabilities of heat cycling and thermal cycling.

As the market of power module is expanding, the current density of power module is increasing. In addition there is an increasing need for operations at higher temperature and larger temperature swings of power module, for example, at very slow rotation speed of a motor, nearly direct current or motor lock etc. Therefore the reliability of power module with larger temperature swing of package, such kind of heat cycling or thermal cycling are becoming more important in addition to power cycling. To meet the requirement we have proposed the new package structure that combines a developed Insulated Metal Baseplate (IMB) with new direct potting (DP) resin [1]. In this paper, the advantage of this package in reliability is reported.

Fig.1(b) shows the newly developed structure that consists of IMB and DP resin encapsulation. The IMB has an insulating resin sheet with high thermal conductivity, copper baseplate and thick copper foil. The CTE of resin insulator is designed close to copper. In this way the solder layer under ceramic substrates are eliminated by adopting IMB. And it is using a newly developed DP resin which is epoxy resin instead of silicone gel for encapsulation.

Since many years we are already manufacturing power modules adopting epoxy resin encapsulation with transfer mold package. And its effect of reducing strain of solder has been reported earlier [2]. However, this transfer mold technology has been applied to smaller size package from the standpoint of higher productivity.

At initial, the transfer mold resin is solid state, but DP resin is liquid state. This means that DP resin can be applied by dispensing method similar as silicone gel. Therefore, the epoxy resin encapsulation by using DP resin can be extended to larger conventional case-type package that has higher design flexibility (Fig. 2). 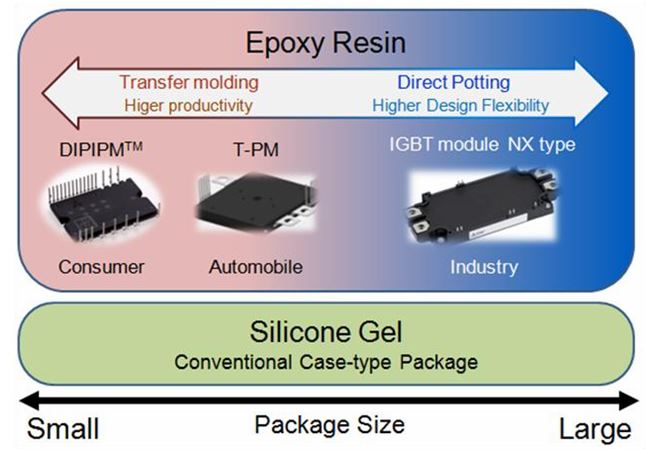 The material of encapsulation for power module is required to have stability of its properties in the range of operating junction temperature (Tjop) of power module. Thermoset resin such kind of epoxy has a glass transition temperature (Tg). Its CTE, elastic modulus and strength of adhesive are usually changed at temperatures higher than Tg. Therefore it is necessary to design Tg above than Tjop. Fig. 3 shows a thermal mechanical analysis (TMA) chart of new developed DP resin. The resin is designed so that Tg is enough over the maximum of Tjop. This results in small deviation of CTE under the Tjop. The newly developed DP resin has also enough fluidity to encapsulate.

Because DP resin is enough rigid as a mechanical structure, it is important to consider balancing the CTE of DP resin, IMB and the other components. CTE of DP resin is basically designed to be matched to copper in IMB that is dominant structural member considering bimetal effect which is causing the warpage of baseplate. Simulated warpage variation in relation to CTE of DP resin is shown in Fig.4. CTE around 15ppm, that is close to copper, induces nearly no variation of warpage. The CTE is finalized by considering with variations of package size or internal layout.

4. Reliability of the new package 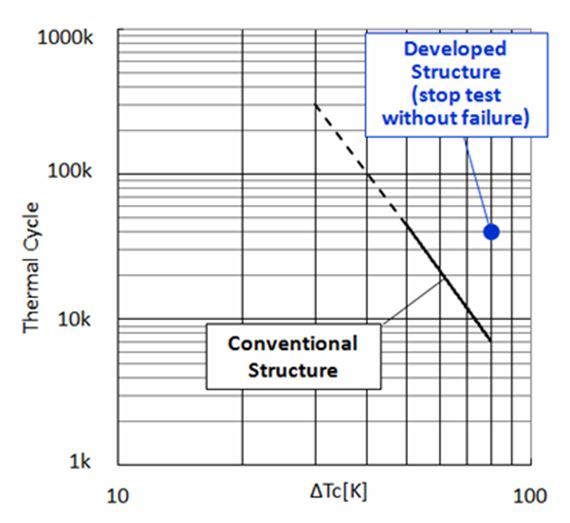 New package structure combing DP resin and IMB has been developed. The DP resin has high fluidity to apply epoxy resin encapsulation to power module of conventional case-type package. The DP resin is optimized considering with Tg and CTE. New package structure has no solder layer under the insulator. In addition, degradation of solder layer under the chips is prevented by epoxy resin encapsulation. As a result, the capabilities of heat cycling and thermal cycling have been enhanced.